skip to main | skip to sidebar

We run a loyalty card scheme. For every 10 pounds you spend you get a stamp and every 10 stamps you collect you get a book up to the value of 10 pounds. Not great but not too shabby either. Customers stamps are kept on a card index behind the till, that way we can keep a record of their transactions.

She only works round the corner.

It's Private Pike! And what a lovely bloke!

The Long Tail and price

by George Orwell (Author), Malcolm Bradbury (Introduction) "Mr Jones, of the Manor Farm, had locked the hen-houses for the night, but was too drunk to remember to shut the pop-holes ..." (more)

Over the last few years the price of backlist titles has steadily increased. Classic books and interesting re-issues are now regularly priced at 10, 12 sometimes 15 pounds for a standard paperback. Selling a copy of Animal Farm for £8.99 the other day I felt guilty for charging a good customer such a ridculous price for a slim book. Of course it all make sense when you go on the internet and see how much you can buy it online for - £4.97. It becomes starkly obvious then that publishers are artificially inflating cover prices of the back list, the long tail to accommodate the book trades obsession with discounting and the appearance of a bargain. Animal Farm should always be a £4.99 paperback but we can only buy it from the publisher for that much! But also Internet sales suits publishers as they don't have distribution costs and Waterstones returning core stock every 3 months to regulate their cash flow. The publisher-Internet retailer is becoming more and more dominant for back list titles. Of course it is, it makes business sense! And with Tesco and Asda and Smiths taking care of the big 100,000+ best sellers what room for the lowly, browsable independent bookstore. We just can't afford to stock up on our bread and butter back list. Jesus, I wouldn't buy Animal Farm for £8.99...
Posted by Adam 7 comments: 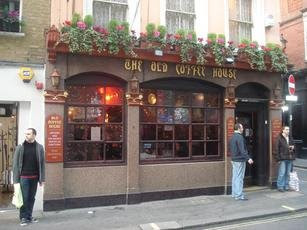 Last night I met my brother and sister at a pub in Soho - The Old Coffee House. There are plenty of places to drink in Soho but only one pub with four Brodie's ales on tap. I had to sample them all and you've got to have a pint in a proper pub haven't you? Then I had to sample some of them again to check quality consistency and I am pleased to report all the beer I drank last night was bloody lovely. I arrived home later than expected and this morning I am feeling somewhat fragile but it was worth it for a night out with my siblings - the last such night before I leave the capital.

Things got off to a great start. My brother and I stood outside and about half a pint in an Irish beggar fired a series of jokes at us. We were in the midst of giggling when my sister arrived and having liberated all the change from our pockets we drank up and began again. We talked and drank and drank and talked and it began to rain a bit but we were protected by a low flying squadron of hanging baskets and were able to remain outside.

"It's just a shower!" I confidently proclaimed as the sky split asunder and the street was lit with lightning.

The plan was to drink all the ales of Brodie (this was my plan - the siblings were on lager - a rivalry that shall run and run) then head for Lower Marsh where I knew Nat had some luverly large bottles of French cider in. But it kept on raining harder and harder. When the hanging baskets began to drip we flung a final curse to the heavens for another rubbish attempt at summer and went inside to prop the bar up. There was sunshine inside - brilliant hoppy stuff.

To cut short a story that could get as repetitive and dull as a man who has drunk all the ales of Brodie at least once we never did get to Lower Marsh. But we did have a good time didn't we bro/sis?

Au revoir my dears, au revoir - or in the words of Arnold - "I be back..."
Posted by CPMatthew 2 comments:

A friendly Danish tourist in the shop...

'My God, books in England are SO much cheaper than in Denmark'

'I wish you'd tell our customers that. Maybe they'd buy some more...'
Posted by Adam 2 comments:

Yesterday afternoon I found myself, for reasons that are too complex to go into just now, wandering around the O2 centre on Finchley Road. The last time I visited this self-proclaimed "hub of entertainment" I was in the esteemed company of Jonathan Franzen. He was in the eye of the storm that publication of the Corrections caused on both sides of the Atlantic and had just finished a signing session at the bookshop formerly known as Pan. Pan was famous for signed copies and Franzen was hot hot hot so we had plenty (hundreds!) of copies in. At some point during the signing I received a nasty paper cut, occupational hazard of bookselling, and bled all over several copies. The book had a cream cover. I was troubled. But Franzen remained cool. He inscribed my copy with the legend "For Matthew, who bled for the cause."

Franzen was reading at the O2 that evening and I was keen to attend yet had completely failed to book a ticket. When he suggested that Glenn and I accompany him to the talk in his chauffeur driven limo we did not refuse. Oh no we did not refuse. We went in the limo. We discussed books and writing. Glenn and I suffered shock and awe. In a good way. Then we listened to Franzen talk. Zadie Smith was sitting behind us with Hari Kunzru. We were all in shock and awe. In a very long winded way what I'm trying to say is that the last time I visited the O2 centre it was a memorable experience...

I entered the O2 through Sainsbury's. After silently karate chopping my way through the throng of well-fed North London folk milling about in the orange ailes I made combat with leaflet waving types at the bottom of the escalators before rising to the upper levels. Here I discovered that Books Etc was now Waterstone's. I went inside and thought I would have a look for Philip Hoare's Samuel Johnson Prize winning book Leviathan. I couldn't find it anywhere. I was without a book and was seriously thinking about buying Leviathan so I could read it that afternoon. And this is where the fun starts.

I went over to the counter and asked the chap standing there if they had "That book about Whales, the Philip Hoare one."

"Leviathan or the whale by Philip Hoare" he responded. "Yes I think so" he said "follow me."

So we set off to look on several tables then the Natural History section and finally Gardening. But there was no sign of the book.

"Is it out in paperback?" I asked.

"Yeah, we were selling it at the weekend" he replied. "I'll check the stock room."

I hung around for a few minutes. There was a computer available for customers so that if they couldn't find the book they wanted they could order it via Waterstone's.com. The situation in a nutshell - how to compete vs the Net? Where everything is available now(ish) for less than on the High Street.

The bloke was back.

I was actually planning to leave but right away the bloke plucked a book from the shelf and handed it to me. 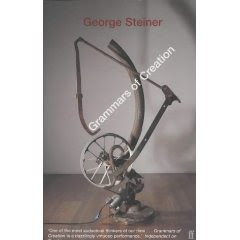 Wow - I was impressed. I looked at the book. The bloke mumbled a few words about it in a manner with which I am very very familiar. He tried to compress what he felt about the book into a few sentences. It was a book he obviously loved and had read. I was infected but didn't want to admit it right away.

He pulled down a book of essays by Truman Capote. Cool.

"I'll have a look at these" I said and he was gone.

At the counter I bought the book.

"Wasn't this a Borders or something?" I asked.

"It was Books Etc and now it's Waterstone's"

"What's the difference?" I asked.

Same staff though. Great people payed a pittance for their hard work and passion. The sort of job you do after leaving Uni for a couple of years. (In Germany you need a fu**iNg degree in bookselling!)

I spent most of the rest of the day reading Grammars of Creation. First in the pub, then on the tube, then in another pub, then by the river, then on the bus. I found it hard to understand but very engaging and extremely provocative and interesting. I would never have picked it up a million billion years but for that bookseller.

And that, dear reader, (if there are any left!) is why this post is an elegy. Booksellers are dying out. We are being snuffed by the net and by a culture that knows what it wants and wants it NOW. With our passing something will be lost. And that is sad - for the likes of us (booksellers) but also for you lot. Those with minds that search and search - who value the peculiar, the found, the forgotten.

Reader, our culture has spoken. Well done to Richard Charkin and the rest of the net book agreement destroyers.

You were right. We are NOT WORTH IT...
Posted by CPMatthew 3 comments: